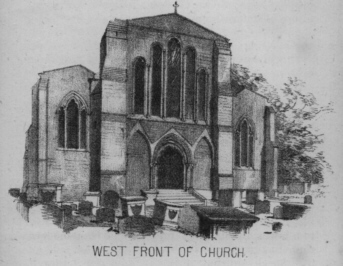 THE Parish Church of St. Mary, Berkeley, is one of the finest in the county, and may in many respects challenge comparison with some of our noblest ecclesiastical edifices.

The splendid west front with its beautiful five-light window and elaborate doorway, the lofty and spacious nave, and tile clustered pillars and graceful arches of its arcades are scarcely equalled by many of our cathedrals. The other parts of the church are, however, scarcely worthy of so grand a centre.

The aisles are comparatively poor, and their western terminations contrast most unfavourably with that of the magnificent nave; the absence of a tower and the flatness of the roofs are serious defects in its external appearance ; the south side, however, with its ancient doorway and circular window, its clerestory, and the beautiful sepulchral chapel of the Berkeley family, are well worthy of a study.

No positive records exist of the erection of the church, but it is supposed by Fosbroke to have been founded by Robert Fitzhardinge during the building of the castle. An older church, attached to a tower of which the present one is a modern reproduction, formerly stood on the other side of the churchyard, but it is not known whether it was the prebendal church which existed here down to the latter end of the twelfth century, or some remnant of the nunnery which was suppressed in the reign of Edward the Confessor.

If, however, Fitzhardinge built a church it must have been gradually rebuilt at subsequent periods, as nothing now remains which is clearly of his era except the south doorway and the font. There are, however, some appearances of work of a still more ancient date, which countenance the supposition that Fitzhardinge partly rebuilt a previously existing Saxon Church, and that his church was again altered and rebuilt by his successors during the 13th and 14th centuries. The arcades and the west window and doorway were probably the work of Thomas, the 6th lord, during the reign of Edward I. The chancel was next enlarged and the south aisle rebuilt probably by lord Thomas his grandson early in the 14th century, and the re-erection of the north aisle took place at a somewhat later period. These alterations were probably made while the venerable Trevisa was the parish priest.

The perpendicular windows in the chancel and the rood screen of the same style, are of much later date. The latter was probably put in to replace an older one of timber, and perhaps also to counteract some tendency to give way which is still visible in the chancel arch. The arms emblazoned on the screen are those of the various alliances of the noble House of Berkeley.

The paintings on the walls of the church are most valuable and interesting examples of ancient decorative art.

They are exact reproductions of the original decorations of the 13th century, remains of which were found in all parts of the church when the repeated coats of whitewash and plaster were removed during the restoration in 1865. It is the opinion of competent judges that they form part of the original design of the building, many parts of which appear to have been left purposely bare of architectural ornament, in order that the want might be supplied in this manner. For this purpose they are most effective; the long straight lines of pattern fill up what would otherwise be blank spaces of wall, and enhance the perspective effect, while the richness and warmth of the colouring are most grateful to the eye after the cold whitewash to which the present generation has so long been accustomed. Some remains of a later and inferior style of mural decoration have been left on the wall over the north door. At the east end of the north aisle there are some fragments of an ancient painting of a martyrdom, near which on the splay of a window, was a beautiful figure of a saint or angel now almost faded away. Over the chancel arch appears part of what was probably a "Doom Picture," or representation of the last judgment. On the wall at the east end of the south aisle is a painting of the Tudor rose, surmounted by a crown, on each side of which are the letters E. R. A similar figure was found between each of the windows of the south aisle. There are also in the south aisle some curious narrow slits or recesses in the wall, between the windows, which occasioned no little speculation when they were discovered during the restoration. It is most probable that they were made to receive the timbers of a former high pitched lean-to roof.

At the east end of the north aisle was situated the altar of St. Maurice, or St. Maurice's chantry, which was founded in the reign of Edward III. by one of the Berkeleys. The mutilated remains of the piscina are still visible. Another chantry, called St. Mary's or Our Lady's chantry, was founded and endowed by Thomas, the eighth lord; the altar was situated on the south side of the rood screen, where the piscina still exists. The chantry of St. Andrew, at the east end of the south aisle, was founded in 1385 by the lady Katherine, widow of Thomas the eighth lord, whose tomb bearing their effigies is placed near the altars which they founded and endowed. By the statute of the Dissolution of Chantries in the reign of Edward VI. the lands forming these endowments came to the Crown, and were granted or sold to various persons. The Chantry priests resided on the site adjoining the churchyard, where Chantry Cottage now stands.

Besides the monuments in the sepulchral chapel, the church contains only two tombs of members of the Berkeley family, most of whom down to 1463 were buried in St. Augustine's, Bristol. Under an arch on the south side of the chancel, communicating with the sepulchral chapel is a fine altar tomb of alabaster bearing the effigy of James, eleventh lord Berkeley, who built the chapel, and who died in 1463. By his side, on the same tomb, is a smaller but similar figure representing his second son James, who was slain while serving in the wars in France under the celebrated John Talbot. Under the second arch between the nave and the south aisle is the tomb of Thomas, eighth lord, one of the benefactors to the church already mentioned, who died in 1361, and in whose time the murder of Edward II. took place.

The tomb bears his effigy and also that of the lady Katherine his second wife, who died in 1385. In the window near are three small recumbent figures in stone, being those of three of their sons who died in their infancy.

It is probable, from the quantities of fragments, of stained glass which were found under the floor during the restoration of the church, that all the windows were once filled with stained glass. They were most probably destroyed during the siege of the castle in 1645, when the church, which formed part of the defences of the garrison, was stormed and taken by the Parliamentarians. Some interesting traces of these events are still visible in the west doors, which have been pierced for musketry, and are marked in many places by hostile bullets.

During the restoration of the church, some interesting relics, proving the Roman occupation of the place were found at a depth of nearly four feet beneath the soil in the chancel. One of these, a Roman brick or tile bearing the inscription

has been preserved by being imbedded in the plastering of the wall on the south side of the chancel arch, near the lectern. There are also two large flat stones; nearly square, having on one side circular mouldings about two feet in diameter somewhat resembling the bases of columns. These are at present in the sepulchral chapel.

The restoration of the church was carried out in 1865 and 1866, by Mr. (now Sir Gilbert) Scott, a manner entirely worthy of its fine original design. The expense was borne chiefly, by the late Lord Fitzhardinge, whose liberality to the church forms a worthy sequel to that of his ancestors of the 13th and 14th centuries.